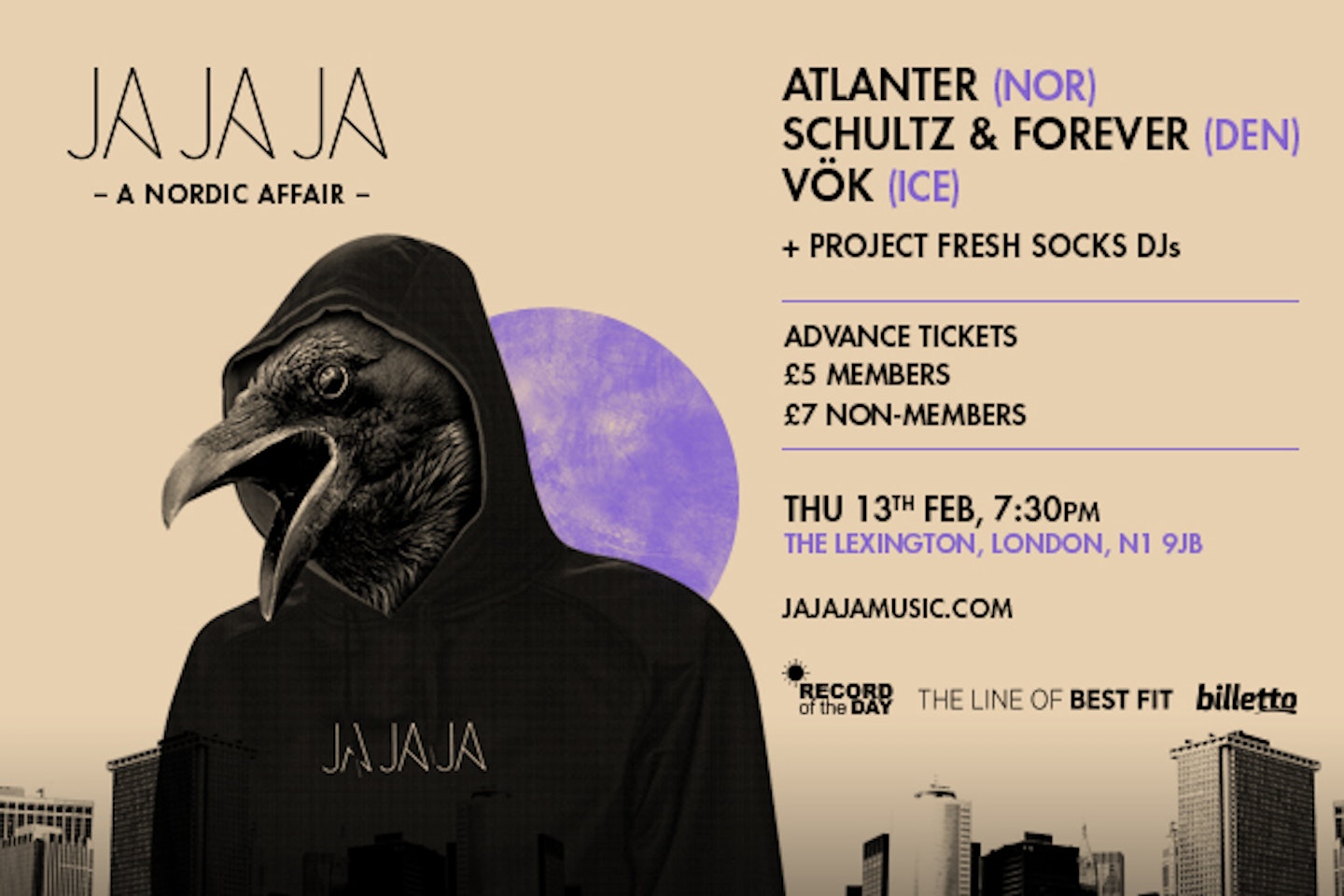 After a restful holiday sipping glüwine and nibbling Nidar Favoritter, the UK's foremost new Nordic night Ja Ja Ja returns for their first event of 2014, hosted at London's The Lexington on Thursday 13th February. This feted series continues on from the roaring success of their inauguralJa Ja Ja Festival at The Roundhouse last November, as well as bringing Mø, Jaakko Eino Kalevi, Satellite Stories and Olof Arnalds to London over the past year.

The line-up for the February Ja Ja Ja will feature Norwegian Americana band Atlanter, maverick Danish singer-songwriter Schultz & Forever and atmospheric electronic trio Vök, plus resident DJs Project Fresh Socks. Read on for more info about all three acts, alongside video and mp3 links to whet your appetites for this latest offering of excellent Nordic talent.

Ja Ja Ja regulars can become members to get discounted tickets and other Nordic treats on signing-up here. Tickets are £5 in advance (£7 for non-Ja Ja Ja members), on sale now on Billetto.

Arild Hammerø and Jens Carelius have made a name for themselves as solo artists in their native Norway, and now they're joining forces along with seasoned session musicians Morten Kvam andJonas Barsten Johnsen in new band Atlanter. Putting a Norwegian twist on the blues, they play what they describe as 'viddeblues' - a mix of German krautrock and old delta blues-Americana.

Debut album 'Vidde' was released in August 2013 on independent label Jansen Plateproduksjon - which featured as part of the inaugural Ja Ja Ja Festival's record label market back in November. In December, 'Vidde' was nominated for a Norwegian Spellemann Award as the Best New Indie Record of 2013. Ja Ja Ja has Atlanter pegged as one of the 5 Norwegian artists to watch in 2014.

Watch the live video for 'Pike':

Schultz and Forever is the alias of 19 year old Dane Jonathan Schultz and his musical bedroom project. In November 2011, he recorded his debut EP 'Odd Stories' in his parents’ house located deep in the forest of Vallø. Not long after, Schultz and Forever was booked to play Spot Festival 2012, with his jam-packed popular set resulting in standout EP track 'Falling' shooting to number 1 on Danish radio P3's Det Elektriske Barometer chart.

Listen to the otherworldly 'Falling' with the fittingly dreamy video.

Leading local magazines and newspapers, Gaffa, Soundvenue and Politiken all hailed Schultz and Forever as one to watch in 2013, with Gaffa exclaiming that 'They’ll be big in 2013'. Politiken gave him the biggest accolade by naming Schultz as “Upcoming artist of the year”, awarding him 40.000 Danish kroner and placing him on the front page of their magazine with the headline “The new folk music hope of Denmark”.

Jonathan followed up the feted debut with the 'Celine' EP, written and recorded in Paris withCracki Records after the label invited him on an inspirational journey to the French capital. On release the EP won plaudits from Gaffa again, as well as The 405, describing one track as 'Equally idiosyncratic and spellbinding, the band's song 'Sociopathic Youth' perfectly represents the raw, delicate beauty of Schultz and Forever'.

Schultz & Forever is working on his debut album right now, expected to be released later this year.

Vök are a trio from the cozy fishing village of Hafnarfjörður, Iceland, making soft electronic music with melodic vocals. Currently the subject of much excitement in Reykjavík scene, Vök first came to people's attention through winning the Músíktilraunir battle of the bands annual contest in March 2013.

Margrét Rán and Andri Enoksson formed the band just a year ago, though they’ve been working together unofficially for some time. The third member Ólafur Alexander joined their ranks shortly after and with that, the future line-up of Vök was completed.

Watch the video for the haunting 'Tónarúm':

Founded in 2009, Ja Ja Ja is the definitive Nordic website, club night and festival celebrating the very best new music emerging from Sweden, Finland, Iceland, Norway and Denmark. Each month at The Lexington in London, Ja Ja Ja hand-picks the finest emerging talent from the Nordic countries, making sure that only the best music is filtered through to your ears. Most recently, the first Ja Ja Ja Festival took place at The Roundhouse in November 2013, headlined by Mew and Shout Out Louds. Ja Ja Ja is brought to you in association with The Line of Best Fit and Record of the Day.