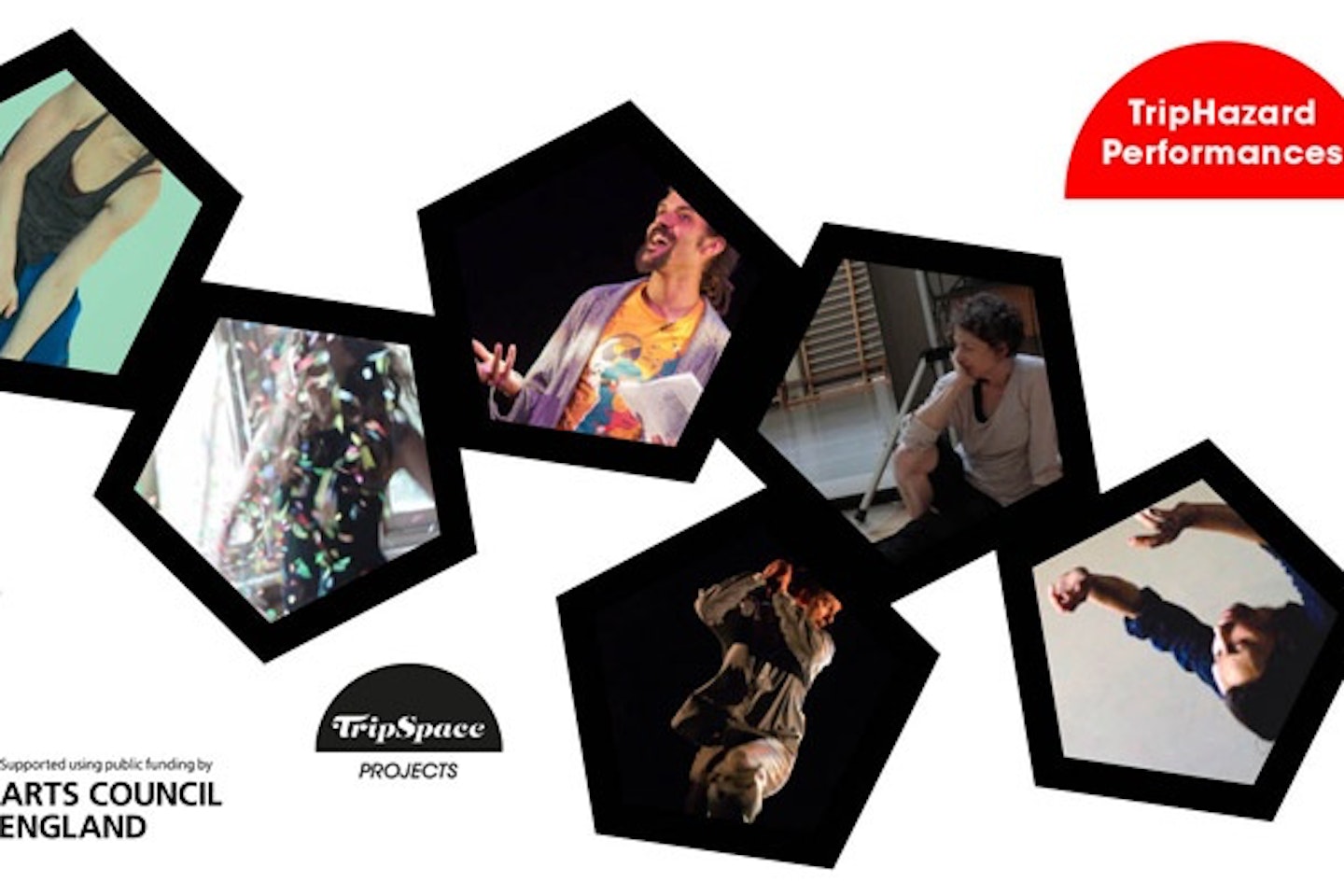 Five artists present the inner workings, juicy nuggets and performative manifestations of their current research in dance and performance.

Over the last 7 months Léa Tirabasso, Petra Söör, Rick Nodine, Seke Chimutengwende and Simonetta Alessandri have been teaching and making work in tandem at Trip, allowing their practices to travel between and across morning class and rehearsal room.

Come and experience the wild, the in-between, the resolute and the experimental choreographic propositions of 5 artists at the culmination of their TripHazard research.

This event is ‘one price includes all’. See below for performance start times. Feel free to come to what you can/ leave when you need to. There will be breaks for post-it-note feedback and conversation.

RICK NODINE | Breath Sounds | (ongoing installation 5:30PM-7:30PM)
Lay on the floor and dissolve into the sounds of the respiratory system or observe the kaleidoscopic patterns of the dancers undulating in united rhythms or do both together.

Rick's dancing began socially and the first technical form to Chanel his enthusiasm was Contact Improvisation. He started teaching Contact at LCDS In 2001 and gradually expanded the Scope of his pedagogy to include composition, performance and voice/movement techniques. His personal performance practice has always straddled improvisation and choreography.
As a choreographer Nodine has made work for many contexts, including; major Opera houses, small theatres, art galleries, text based theatre, touring dance companies and warehouse parties.

MASS
What happens when we gather? What governs what we do? Can we make something that stands for all of us? In this week, we will look at group­ness; choruses, flocks, multitudes, polyphonies and collective movements.

MATERIAL
What are performances made of? What materialises and from where? And how do we relate to what comes up? In this week, we will deal with the matter of performance; making things up, breaking things down and re- arranging the furniture.

DISTURBANCE
What bothers us about dance? What disturbs us in the world and what can we disturb through dancing? This week we will shake things up, interfere, interrupt, cut through, make noise, provoke and get silly.

Seke Chimutengwende works in dance as a performer, choreographer and teacher. He has performed for companies such as DV8 Physical Theatre and Lost Dog and has performed his own solo improvisation work internationally since 2006. He performs ensemble improvisation with Neat Timothy and teaches improvisation internationally. For his company Seke Chimutengwende & Friends he has choreographed four works: Mr Lawrence, The Time Travel Piece (for The Place Prize), 45 Dances for The People of Ham and King Arthur which premiered at The Yard Theatre in June 2015.

SIMONETTA ALESSANDRI | (9:20pm)
Simonetta presents a work in progress that started from the observation of film documentation of Tarantism, a women's trance dance from Southern Italy.

Simonetta is an Italian dance artist based in London. Her work is informed by more than 30 years of dancing, teaching and choreographing. More recently she’s researching application of The Feldenkrais Method into performance making.

LÉA TIRABASSO | TOYS | (10:10pm)
TOYS is the morning with a hangover. It is the game, the absolute, the disguise of tragedy behind the constant of celebration.

Léa has worked with José Vidal, Clod Ensemble, Seke Chimutengwende, Jean-­?Guillaume Weis, Bernard Baumgarten. For two seasons she worked with the Tanztheater Kassel under the direction of Johannes Wieland, where she also worked with Stephanie Thiersch and Chris Haring/Liquid Loft. Since 2013, her own choreographic work has been performed in England, France, Germany, Spain and Luxembourg.