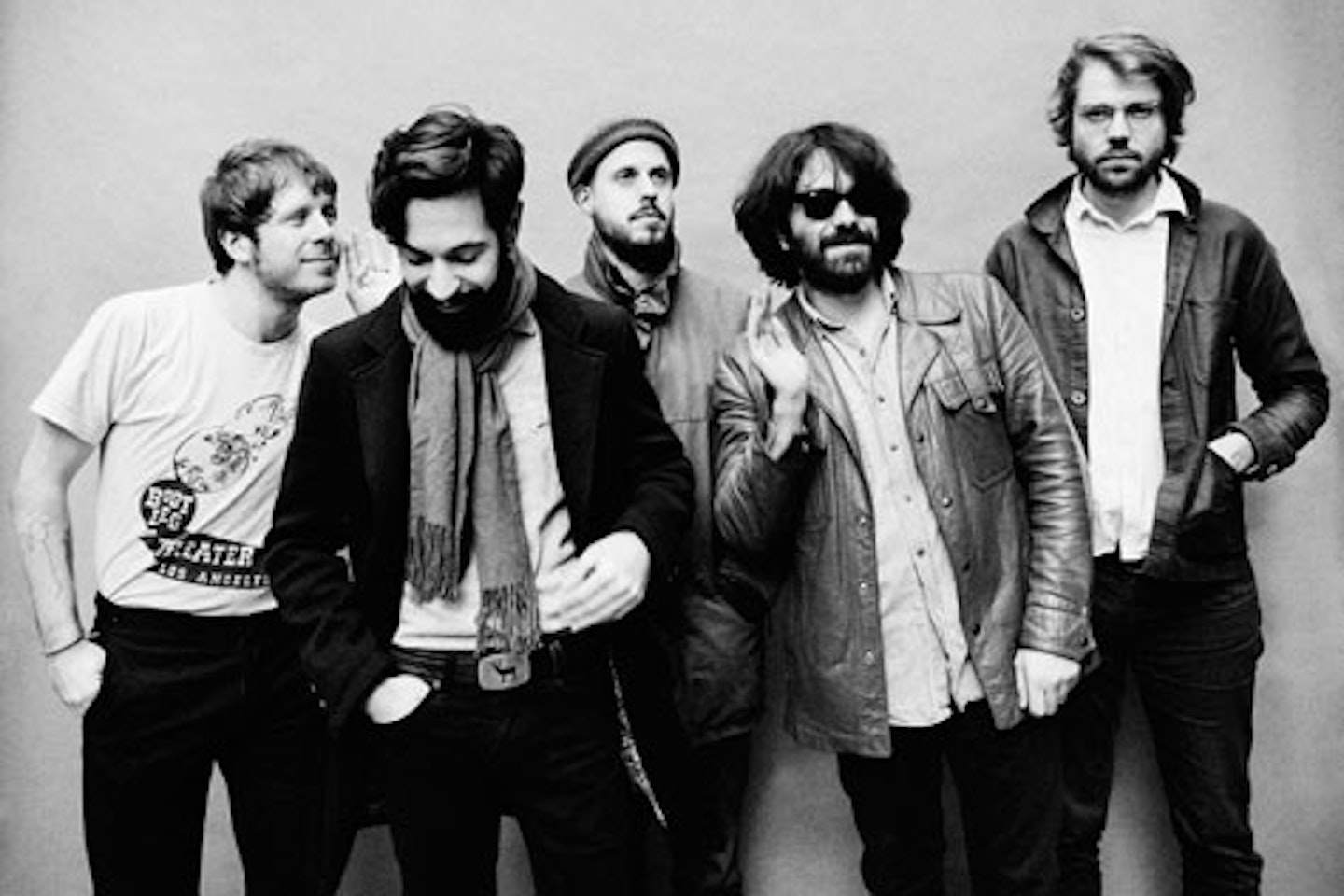 With their quintessential vintage West Coast sound, it’s fitting that Treetop Flyers laid down their outstanding country soul debut in the canyons of Southern California. Though based in London, the British five-piece – Reid Morrison (vocals/guitars), Sam Beer (guitar/vocals), Laurie Sherman (guitar), Mathew Starritt (bass/vocals) and the band’s lone American Tomer Danan (drums/vocals) – swapped urban England for the picturesque beaches and rolling hills of Malibu in order to record the classic-sounding The Mountain Moves.

‘Our music makes sense there,’ explains Sam. Yet The Mountain Moves hits home far beyond the reaches of Los Angeles. A record of hope, honesty and huge choruses, its universally reaching songs are strewn with sunshine-infused four-part harmonies, propelled by an irrefutable open-highway groove. Paying their dues to everyone from The Band and Neil Young by way of Little Feat and Fleetwood Mac, there are also gracious nods towards the more contemporary likes of My Morning Jacket, The Coral and Jonathan Wilson wrapped up in these 11 time-travelling tracks.

Sonically, The Mountain Moves might be easy-going, but the process behind it wasn’t quite so smooth. Heading to California after a successful stint of shows at SxSW in March 2012, a hurricane alert and a harrowing airplane ride meant the band ended up stranded on the outskirts of Denver. When they finally arrived in LA, producer Noah Georgeson (Devendra Banhart, Joanna Newsom, Bert Jansch) hadn’t quite finished work on Banhart’s latest album, meaning Treetop Flyers had two weeks to kill.

They spent their fortnight of freedom roadtripping to Joshua Tree, making a Gram Parsons pilgrimage to Cap Rock and also stopping at Pappy and Harriets, a far-flung Mojave favourite of Queens of the Stone Age and Arctic Monkeys. They rocked up to the legendary roadhouse’s famous open mic night in their best cowboy threads to play an uncommonly lengthy set.

The band eventually got to work at Zuma Sound, a brand new studio which had originally been built for Rick Rubin. When they arrived back home, a summer of high-profile festival slots awaited them. They played under Van Morrison at Green Man, and shared a stage withBob Dylan for the second time at The Hop Farm, after opening up for him at London’s Feis in 2011.

‘Debut album The Mountain Moves is chock full of lush harmonies, warm arrangements and billowing acoustic guitars as fresh as a breeze looming in from San Francisco harbour’ – Clash