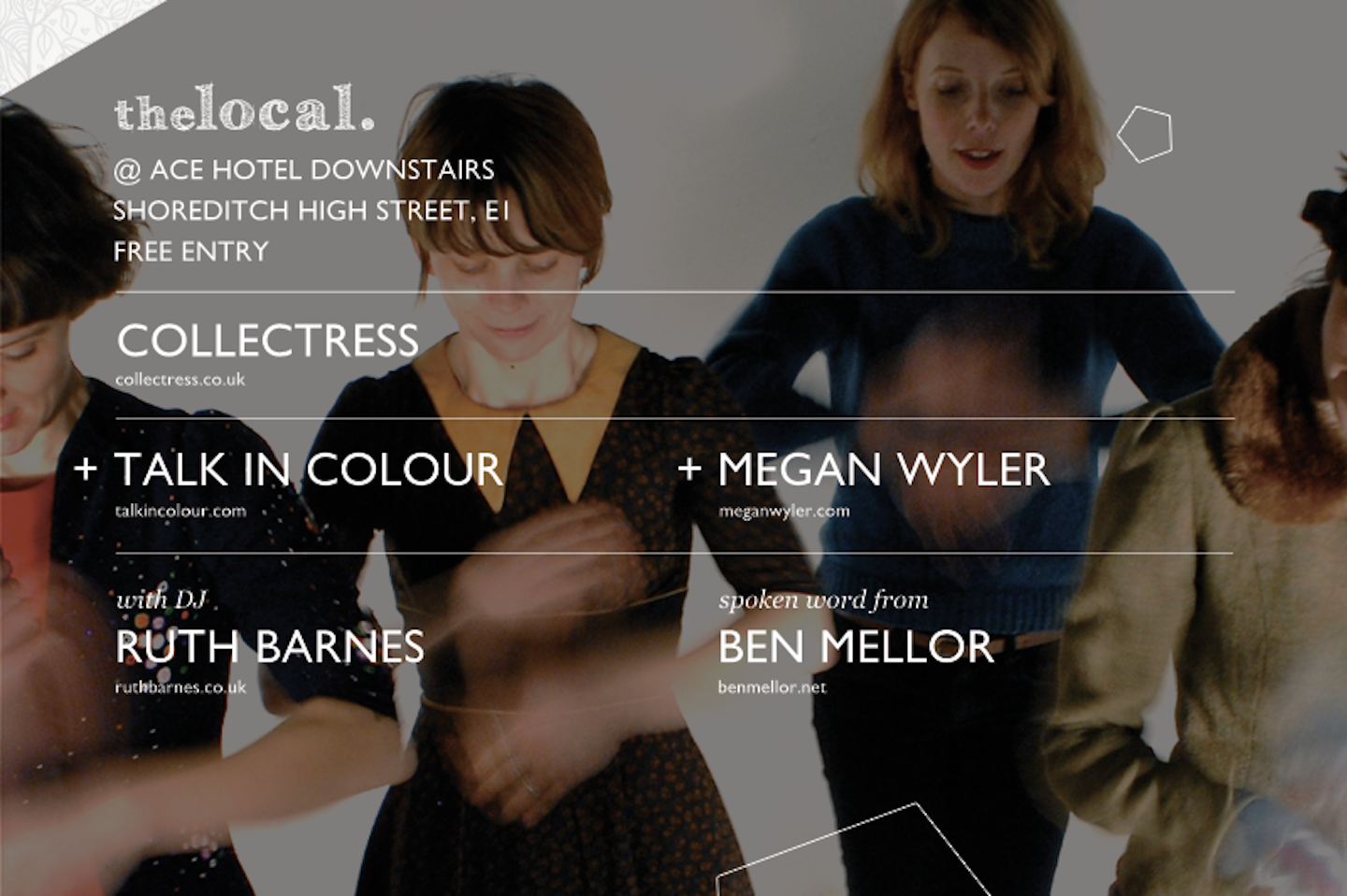 THE LOCAL presents the fourth in a new series of monthly nights at ACE Hotel Shoreditch, featuring a combination of Live Music, DJs and Spoken Word. Events are free but capacity is limited, so reserve your free ticket here now.

Described as a cross between the Elysian Quartet and possessed Brontë sisters teasing an unsuspecting dinner party (Foxy Digitalis), COLLECTRESS are a quartet of long-term musical collaborators from London and Brighton. Their broad and dense experimental structures utilise voice, toy instruments and found sound samples alongside layers of more traditional, often romantic, strings, keys and woodwind. With a nod to everyone from Philip Glass to John Adams, improvisors like The Necks to lo-fi chamber groups such as Rachels, they play and write with a sense of narrative, drawing the listener into a thoroughly distinctive and beguiling world of experimental chamber music.

With a collective biography of collaborations featuring some of the UK’s most innovative musicians and performers, including Bat for Lashes, Penguin Café, Philip Selway (Radiohead), Icarus, Ron Caines (East of Eden), Mary Hampton, Patrick Wolf, The Paper Cinema & Secret Cinema, Collectress craft music both daring and unique, but also compellingly familiar and filmic. Collectress are Quinta, Alice Eldridge, Caroline Weeks and Rebecca Waterworth. Their debut album, Mondegreen, is due out on March 24th.


Nightshifts, the first single from the upcoming album Colliderscope, is released in October 2011. The track features in new British film Junk Hearts and is available as a free download.

The band were formerly known The Shadow Orchestra.

Shadow Orchestra’s eponymous debut album was the solo efforts of Chris Bangs in a tiny bedroom studio. The five piece evolved out of Chris’s desire to go beyond the limitations of playing solo laptop sets and they recorded an EP called “Remaker”.

Despite the fact that in the literal sense there were now more players than ever, it was upon entering the studio to record the album that Chris and the group began to feel that the project had outgrown the ‘Orchestra’ tag: they were now a band in the traditional sense. Add to this the fact that “Shadow” implied a certain darkness whereas the music had become in parts more playful, more open and less nocturnal and ambiguous the decision to change the name was made.

Colliderscope is to be the band’s debut album as a full five piece.

Talk In Colour are:

Together the band blend electronic and organic instrumentation into a blistering aesthetic.

London-based MEGAN WYLER has a stripped-down, vocal-led sound that is sparing and pure. Her varied career includes leading a Balkan choral ensemble, touring with gypsy string band Luminescent Orchestrii, music directing for theatre and drifting into your ear-holes regularly on television. Part of the UK folktronica scene her songs have been described as conjuring up “the icy magic of winter, with sparkles of sonic glitter used sparingly throughout” (Whiteboard). Her first solo album, ‘Through the Noise’, arrived to critical acclaim last fall.

"It's all about the voice here, and Megan Wyler's voice is as pure and pretty as any you're likely to hear...this is the real deal and is stunningly note perfect" (SOUND OF CONFUSION)

“A cut above the rest” (INDIE SHUFFLE)