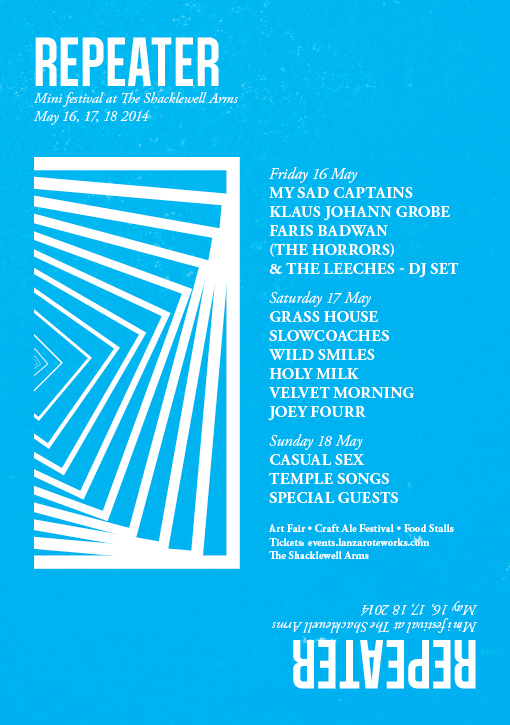 The Shacklewell Arms and Lanzarote Events are delighted to announce the second Repeater Festival will take place on the weekend beginning Friday 16th May. Following the success of the inaugural event in March, we have another selection of the venue’s favourite acts and rising bands alongside The Shacklewell Arts Fair and ale festival over the course of three days.

Friday 16th May will be headlined by Bella Union signings My Sad Captains. The indie-pop troupe recently released their new album ‘Best Of Times’ to critical acclaim. Support on the evening will come from Switzerland’s Klaus Johann Grobe. The German speaker blends hypnotic kraut and psych infused instrumental wanderings. To top things off, The Horrors’ Faris Badwan and his brothers The Leeches return to their spiritual home to take over the afterparty with one of their famed DJ sets.

‘Outsider-pop’ quartet Grass House top the all day bill on Saturday 17th May following the release of their captivating new single ‘A Thousand Generators’ on Marshall Teller Records. Alongside them, Leeds’ garage punk trio Slowcoaches return to the Shacklewell after a standout performance at the venue earlier this year.

Fun fuzz pop Winchester band Wild Smiles are also on the line up along with the Warpaint-esque brooding pop of Holy Milk and new dreamy psych exponents Velvet Morning.
Ex Tubelord frontman Joey Fourr has forged a weirdo-pop solo career of his own and will be showcasing material from his recent EP releases.

Saturday also sees the return of the Shacklewell Arts Fair. Now on it fourth outing, local artists will be selling illustrations, prints and crafts throughout the afternoon in the front bar and tropical garden.

To satisfy thirsty lips and empty stomachs we will also be inviting specially selected craft ales and food vendors.

Glasgow’s Causal Sex will close proceedings on Sunday 18th May with a set full of danceable post-punk. Support on the evening comes from Temple Songs and some soon to be announce special guests.

More acts will be announced over the coming weeks.