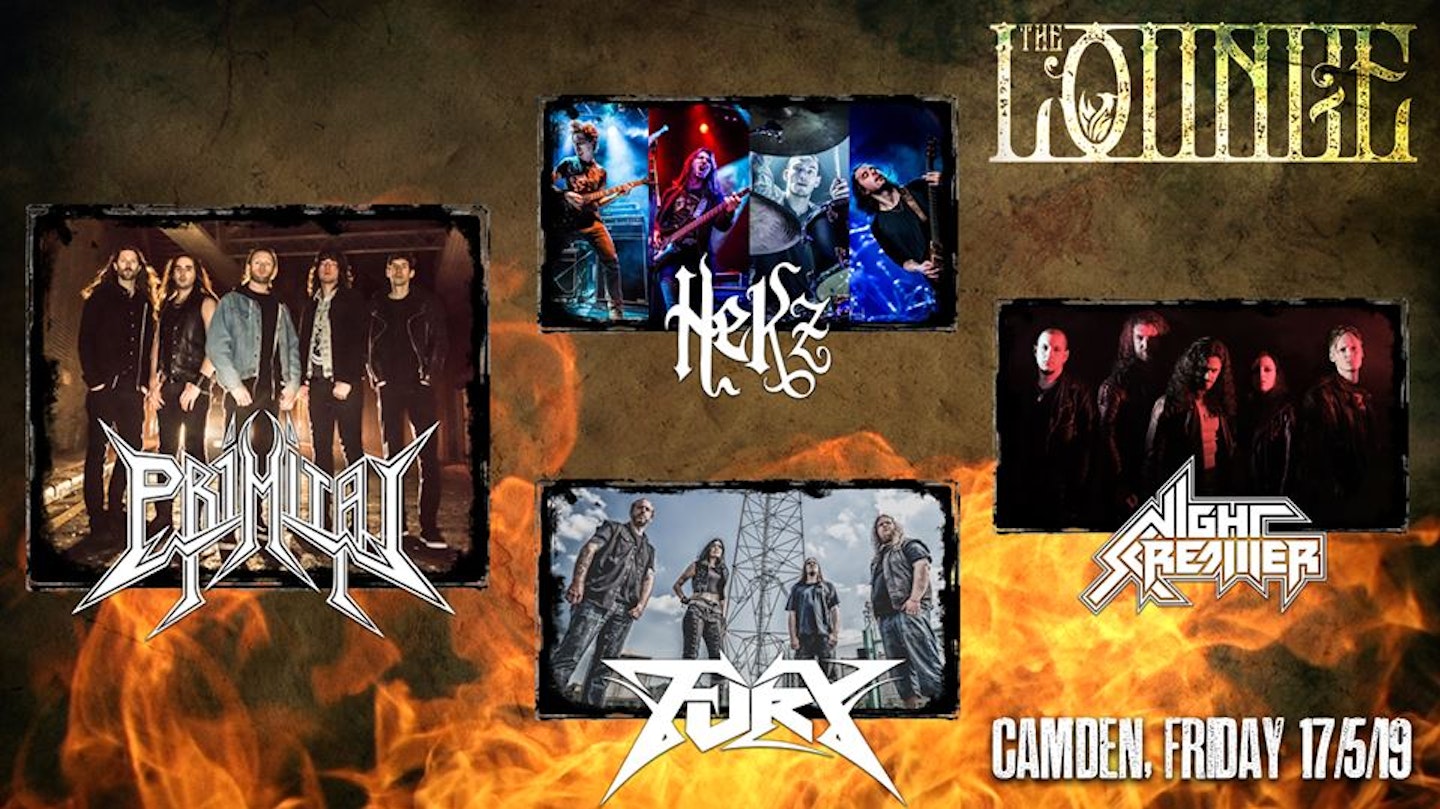 Primitai, Hekz, Fury and Night Screamer at The Lounge, Camden

Singer Guy Miller and guitarist Srdjan Bilic are celebrating 10 years in Primitai, and we’ve put together a hell of a party in Camden on May 17th, featuring HEKZ, FURY and NIGHT SCREAMER, followed by a clubnight til the early hours!

PRIMITAI
Powerful, melodic and timeless heavy metal! Their music has struck a chord with fans across a broad spectrum of metal, which has lead them to appear directly alongside bands from Sepultura, Saxon, Reckless Love, Edguy to Riot V. 2019 sees them promoting their new album THE CALLING and they’re fresh off a UK tour with WOLF. Check out their video for OVERDRIVE https://www.youtube.com/watch?v=MrKz5CTiH2c

HEKZ
Fronted by the inimitable Matt Young, they’re a band who draw influence from prog rock luminaries and heavy metal legends in equal part and seek to take the prog metal blueprint and rewrite it for themselves. Their third album INVICTA takes the best of what the band has done before and pushes it forward into new and exciting territory.
"THINK QUEEN HAVING A BARNEY WITH DREAM THEATER AS RUSH AND IRON MAIDEN DUKE IT OUT ON THE SIDELINES!”
- PROG MAGAZINE

FURY
The Most Electrifying Band In All Of The Milky Way, a band who deliver expansive, panoramic and beautiful arrangements, easily capable of transporting you to alternate and fantastical universes. The potent mixture of Julian's soulful, yet powerful, vocal combined with a brilliantly talented band will really push all the buttons for fans of any genre of music - and with many years of live experience between the group, Fury guarantee an energetic, engaging and thoroughly fun live experience for all! Their “house band” status at the likes of Hard Rock Hell and Hammerfest is just one indication of how good they are live.

NIGHT SCREAMER
A rough diamond about to emerge with an insane debut LP in April 2019, “Night Screamer Is full of classic metal worship which paints pictures of 80s action films”. Featuring Calvin Lever from Red Hawk Rising, Julia Cadau from AngelNation and some other familiar faces!

Primitai, Hekz, Fury and Night Screamer at The Lounge, Camden