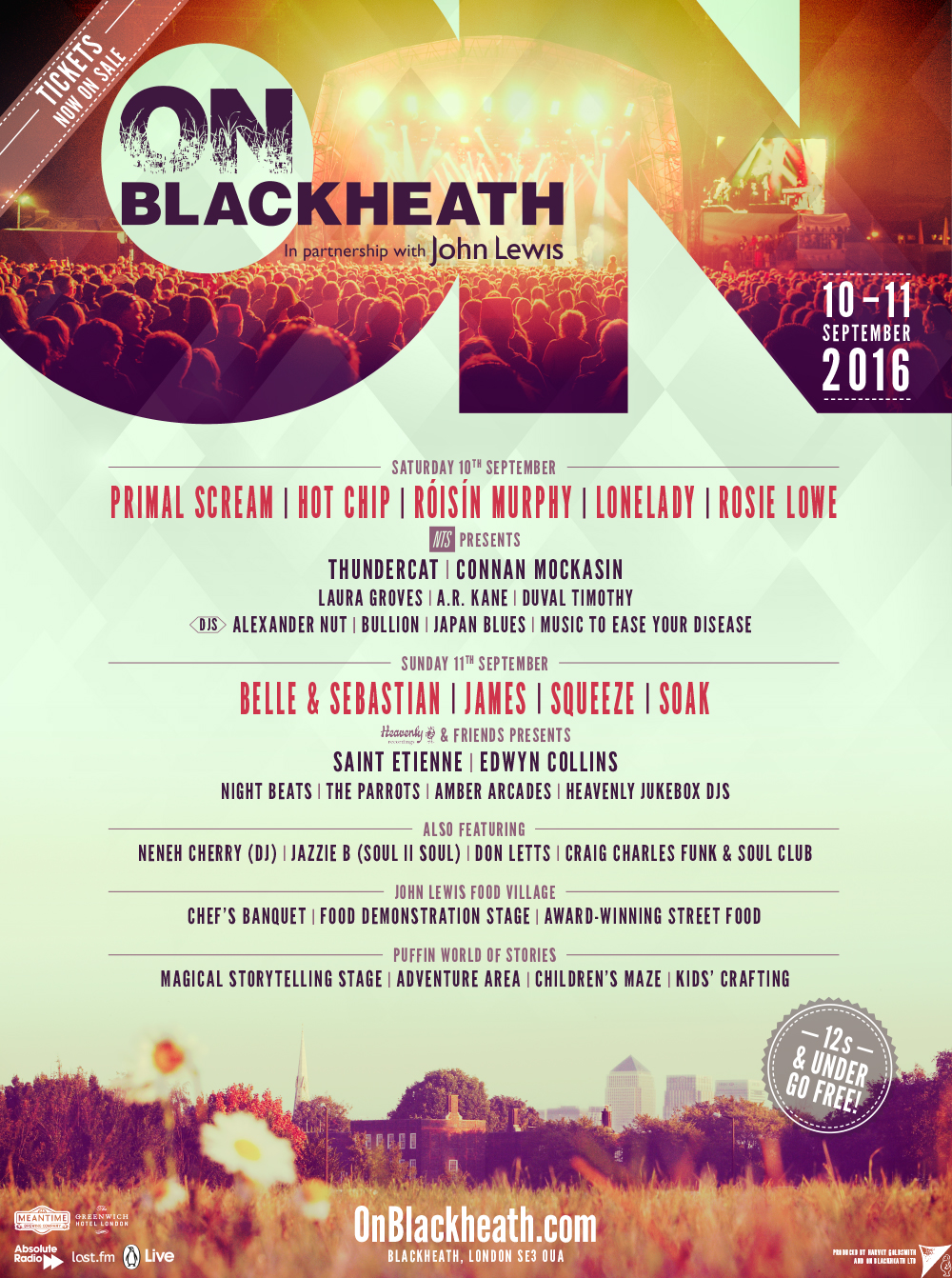 OnBlackheath Festival in partnership with John Lewis, London’s most anticipated music, food and family festival returns this year on Saturday 10 and Sunday 11 September. OnBlackheath is the ultimate weekend for standout live music with mouth-watering food and drink experiences along with a fun-filled program of entertainment for all ages.

Confirmed to headline the Main Stage on Saturday are Scottish rock legends Primal Scream who are on the cusp of releasing their latest studio album ‘Chaosmosis’ alongside Grammy Award winning electronic music maestros Hot Chip. Indie pop icons Belle & Sebastian will headline on Sunday along with multiplatinum-selling James who are set to release their new album ‘Girl at the End of the World’.

This year’s Second Stage will see the return of Heavenly Records with a promised killer line up, and new kids on the block NTS Radio, who have been making big waves since they began broadcasting in 2011.

NTS Radio curates a live stage at this year’s OnBlackheath festival, as they celebrate their 5th year.

An incredibly exciting line up sees Thundercat and Connan Mockasin announced to headline the NTS Stage at OnBlackheath on Saturday 10 September.

New to OnBlackheath for 2016, over the last half decade NTS has grown a local community of music lovers into the leading online platform for underground music worldwide. With beginnings in London and now studios across the country and in the US, the station celebrates its 5th year of broadcasting this year. NTS events are always highlights on London’s music calendar, and they’ll be bringing their highly respected curatorial eye to their stage at OnBlackheath.

In their own words: “OnBlackheath Festival is a unique opportunity for NTS to showcase its diversity in a beautiful South London setting. With headliners Thundercat and Connan Mockasin, NTS is excited to be heading south of the river to explore a different part of the wide-ranging NTS musical spectrum.”

LA’s finest - Thundercat - recently won his first Grammy Award for 'These Walls' with Kendrick Lamar along with a host of nominations for his work on the hottest album of 2015: “To Pimp A Butterfly”. In addition to his outstanding output for Brainfeeder (his recent mini-album “The Beyond... Where The Giants Roam” featured the smash hit 'Them Changes') he has worked with an extensive list of world-class musicians including Erykah Badu and Flying Lotus, and is currently in the studio with jazz pioneer Herbie Hancock.

Sharing the headline slot is maverick musician Connan Mockasin, who initially grabbed the world’s attention with his band, Connan and the Mockasins. After the release of Caramel in 2013 he caught the eye of peers like Radiohead, who invited him to support them on their world tour in 2014. He has recently been working with Charlotte Gainsbourg, and was chosen by Guy Garvey (who headlined OnBlackheath last year) to perform at this year’s Meltdown. His last UK headline show was back in 2014 so this year’s appearance at OnBlackheath at the NTS stage will be a special one.

Alongside these two giants, A.R. Kane, Bradford-born Laura Groves, NTS resident Alexander Nut and South London multi-instrumentalist Duval Timothy will be making special appearances in what will be a spectacular celebration of musical diversity.

With the hottest in music and very best culinary delights, OnBlackheath offers festivalgoers a memorable experience on the historic green space of London’s Blackheath Common SE3. OnBlackheath will also feature an array of exciting attractions including the John Lewis Food Village with a food demonstration stage coupled with celebrity chefs and an immersive dining experience.

Billetto has a special Banquet package available saving you £20 on the total price of a Day Ticket and Chef's Banquet when purchased individually.

Experience an unforgettable day at OnBlackheath and enjoy a fabulous three course meal from one of the world’s best chefs Theo Randall, with a welcome glass of fizz and two glasses of wine or Meantime beer, all for the incredible package price of £67.50 for Saturday and £62.50 for Sunday.

Tickets are selling fast! Limited availability with only 3 sittings per day

For the first time Puffin Books will be bringing to life the kid’s experience with their World of Stories across the festival. OnBlackheath embraces families as under 12s go free!

(Please note: anyone under 16 must be accompanied by an adult with a valid ticket)

OnBlackheath has established itself as a landmark event in the London calendar and has previously presented the likes of Massive Attack, Grace Jones, Elbow, Madness, Manic Street Preachers and Kelis. Last year over 30,000 music and food lovers gathered to enjoy OnBlackheath, across the two days.

The critics were impressed:

“A perfect blend of good food and fantastic music. An all-ages carnival atmosphere” - The Times

“One of London’s most anticipated festivals” - NME

“OnBlackheath is definitely worth a second date next year” - Evening Standard

OnBlackheath
See organiser's profile
Follow
Other events from this category