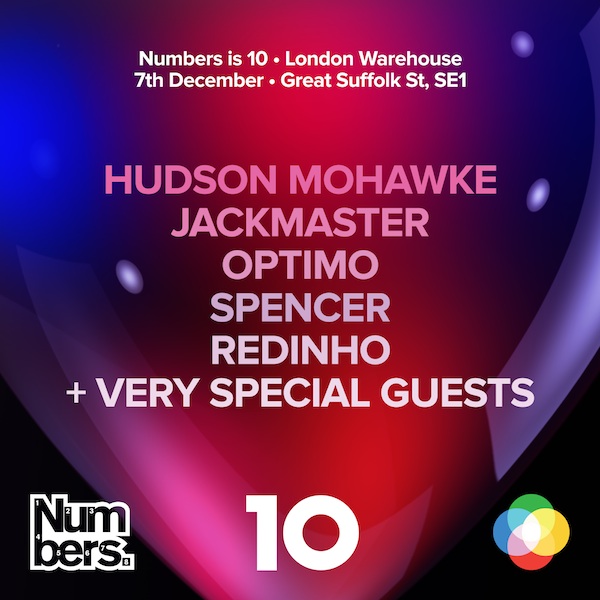 The annual return to London with Black Atlantic - this one's gonna be extra special for our Numbers 10th Anniversary. Be prepared. Sign up at http://nmbrs.net/10

This will be Hud Mo's only solo show in London this year and rounds up an unstoppable 2013 following production work for the likes of Drake, Pusha T and Kanye West. His much anticipated second full length LP is slated to drop next year via Warp Records - if previews of the new productions and his recent Jackson and the Computer Band remix are anything to go by, then we’re in for something very special.

The secret headliners will be revealed on the night. This year we have a few acts up our sleeve including an old school UK Dance legend and the others, well you’ll just have to wait and see.

The massively influential Glaswegian duo of JD Twitch and JG Wilkes who only seem to know one genre of music – good music. They also happen to be two of the soundest guys on the planet and having help shaped the Glasgow and UK music scene for the better

Loved by Hud Mo, Jessie Ware and Mark Ronson and renowned for his unique and energetic live shows, Redinho’s cutting edge fusion of synth heavy talkbox funk and futuristic electronics is about to be manifested in album form on Numbers in 2014

Numbers 10 in London is part of a series of three Numbers anniversary shows taking place over concurrent weekends; beginning with New York on 29th November (with special guests Anthony ‘Shake’ Shakir and DJ Deeon), followed by London on 7th December and ending in Glasgow on Friday 13th (full line up TBA).