French illustrator Cécile Dormeau has a profound knack for depicting the hilarious desires and truths of everyday life. Her mostly female characters evoke joy, empowerment and self-acceptance as they cry, let their bellies and hairy legs out, and wiggle their bits to their hearts’ content. A master of character design (as shown by her Google sticker series Julio the Bull), Cécile will be telling us about the ideas behind some of her funniest and most relatable creations.

Territory Studio is an international design studio known for its graphics, UI and experiential design. A big part of its work is designing screen graphics for blockbuster films such as Ex Machina, Guardians of the Galaxy, The Martian and most recently Blade Runner 2049, designing interfaces and interaction systems that played a huge role in depicting the dystopian future world. Andrew Popplestone from the studio will be sharing the research and development behind this high profile project.

Director Ivana Bobic has made campaign films for Stella McCartney, Nivea and Whistles, and music videos for Bloc Party and Nothing But Thieves, but one project of hers recently made mainstream news when it became the first ad to show a nipple on daytime TV. Ivana will be telling us more about the making of the Coppafeel! ad, and another personal film made during a residency in Senegal.

Mr Bingo is back to tell the heartwarming tale of how he crowdsourced nude models for his saucy advent calendar for 2017. Starring 24 illustrated, real-life characters from all over the globe (plus Bingo himself) whose modesty is covered by scratch-off clothes, the calendar celebrates the human body in all its forms, dancing around naked. “I can’t wait to see my own family scratch my clothes off on Christmas day in horror,” he says. Join us to hear more about this brilliant project. 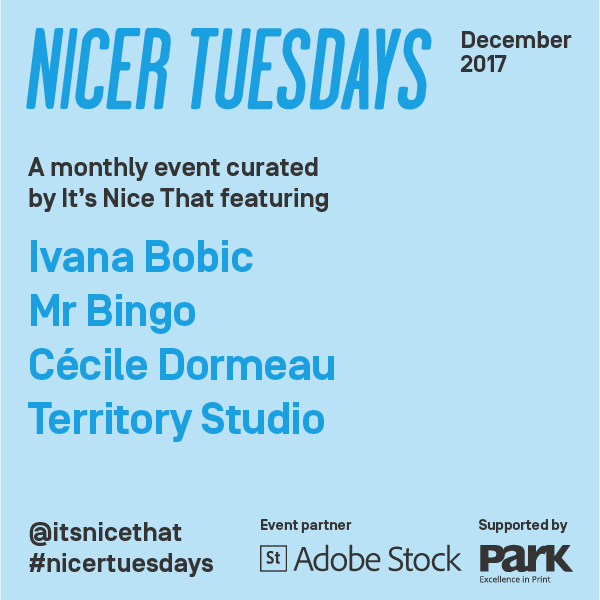 Timings for the evening: doors open at 6.30pm and the talks will begin at 7.15pm. Oval Space will be serving delicious food throughout the evening with the venue open until 10pm.

Nicer Tuesdays is an 18+ event; please bring ID with you to the venue.

A massive thanks to our event partner Adobe and sponsor Park Communications.

Drinks are kindly provided by The Five Points Brewing Company.

Terms and conditions: The programme may be subject to slight changes due to unforeseen speaker cancellations or illness. We will endeavour to find appropriate replacements. Nicer Tuesdays is an 18+ event; please bring ID with you to the venue.

Contact
It’s Nice That believes passionately that creative inspiration is for everyone and by championing the most exciting and engaging work online, in print and through our events programme, we want to open up this world to the widest possible audience.