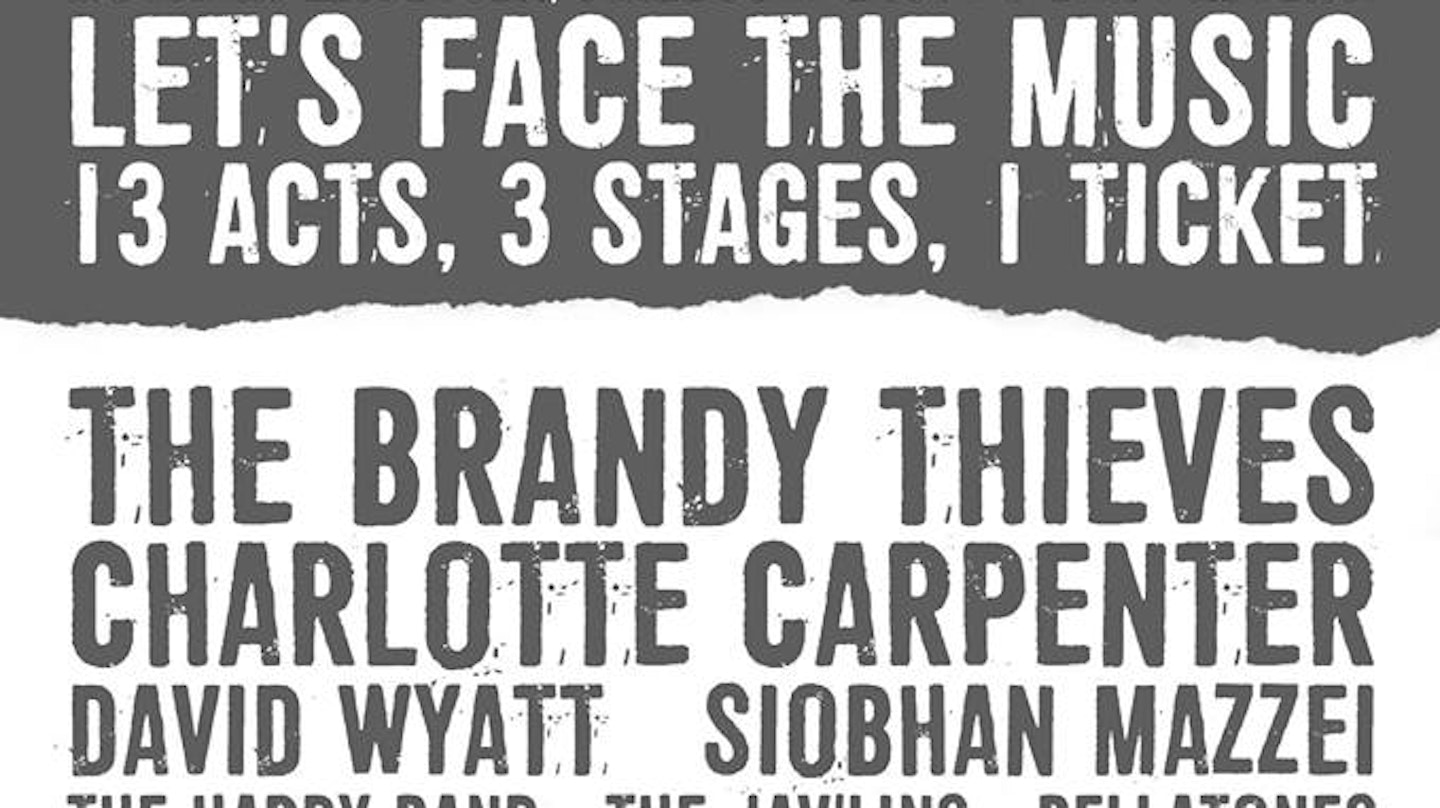 LET'S FACE THE MUSIC! -TICKETS NOW ONLY ON THE DOOR

Friday 22nd March sees possibly one of the best nights of live music this year in the fair city of Leicester. Music in Leicester Online Magazine combines forces with Firebug and Duffy’s Bar to bring you ‘Let’s Face the Music’. Spread over three stages, featuring 13 acts, from rock to folk, from punk to country, from indie to blues, there is something there for everyone, whether you are a veteran aficionado of the local music scene, or a curious uninitiated newcomer.  A true celebration of the Leicester music scene, featuring some of the very best the city has to offer, all at the accessible price of seven British pounds.  This is one night of music that is not to be missed.

Topping the bill on the Roots Stage are those wild eyed Gypsy-Punks -The Brandy Thieves. Not only recognised as one of the best live bands in the city, they are now widely regarded as one the best live acts in the country, being recently voted as one of top twenty festival acts to see this summer. The Brandy Thieves have probably sold out every Leicester show they have done in the last three years so to see them in the intimate setting of Duffy’s Bar is going to be a real treat. Over on the Rock Stage in Firebug, triumphed by the likes of NME and Clash Magazine, is long-time Leicester favourite Charlotte Carpenter. Expect a performance of finely written storytelling cleverly transposed into beautiful indie tunes, topped with superb vocals, all played with as much heart and soul as the songstress can muster. The third headline act of evening is a living Leicester legend, the one and only Dave Wyatt. Having worked with Island Records and EMI, recorded with producer James Sanger (Keane, U2), toured with guitar great Tommy Emmanuel, and gigged with the likes of James Morrisson, Seth Lakeman, The Beautiful South and many others, Wyatt is as unique as he is charming and delivers a show that must be experienced. While these three amazing main attractions are more than worth the ticket price alone, the undercard is positively sublime and any local music lovers dream.

Main support on the Rock Stage is one of the rising starts of the Midlands music scene, with music that is as powerful as it is beautiful, as delicate as it is raucous, Siobhan Mazzei is an enigma among songwriters and one of the very best this city has to offer. Backed by a talented trio of comrades, Mazzei’s sets are nothing less than incendiary. Also taking the stage in Firebug are possibly one of the city’s most underrated rock bands, the mighty blues driven soul n’ roll machine that is The Jav’lins. If you have not seen this band, you need to! Also gracing the prestigious stage of Firebug are alt-rock heroes Finches of Attica. Relative newcomers to the Leicester scene, the boys have been handpicked for this event and are ready to show the city what they are all about.

Meanwhile, over on the Roots Stage, ready to demonstrate a master class in Alt-Country, are Leicester favourites The Hardy Band. Beautiful harmonies combined with driving beats and soulful story-telling, The Hardys do what they do with such perfection, they are impossible not to love. The Roots Stage also hosts Homeless Shakespeare, the purveyor of gyp-hop and dirty blues, dark humour and twisted tales. Homeless Shakespeare is one Leicester's most eclectic and beloved performers. Joining these three acts is the infectious alt-folk of the Bellatones, a musician’s band, they never fail to disappoint as they rely they tales of love and loss with passion and lustre.

The night also sees some of the city’s best solo artists out in force and the Acoustic Stage is ready to reveal a plethora of talent fit for any festival stage. Luke Broughton is steadily becoming one the city’s most revered singer-songwriters, bringing an emotionally charged presence to the stage that sees him stand out from his peers. Haunting lyrics, unique vocals, and a passionate performance, Luke takes his audiences on a journey and gives them an unforgettable experience. Going back to their acoustic roots, duo Elysian have been one of the most popular acts to feature in the city’s open mics. The intricate guitar skills of Lon Fisher combined with the mesmerising vocals of Celia Allsop, it is not difficult to see why the duo has gained such popularity and respect in the local music scene.  Joining these amazing artists is Steve Falkner, a musician with over two decades of performing experience, Steve is the consummate entertainer and will have the crowd singing along in no time. Opening up the evening is, wily wordsmith Paddy Hodgkinson. Playing the perfect mix acoustic blues and sweet English folk, it easy to tell that Paddy is a seasoned veteran of the stage. He immediately brings the crowd into his world and by the end of the gig, has them eating out of the palm of his hand.

Let’s Face the Music takes place Friday 22nd March at Firebug/Duffy’s Bar. Doors are at 7.00pm with the first act beginning at 7.30pm. Advance tickets are available from https://billetto.co.uk or from the venues. Please note all venue are 18+ after 9pm.

LET'S FACE THE MUSIC! -TICKETS NOW ONLY ON THE DOOR