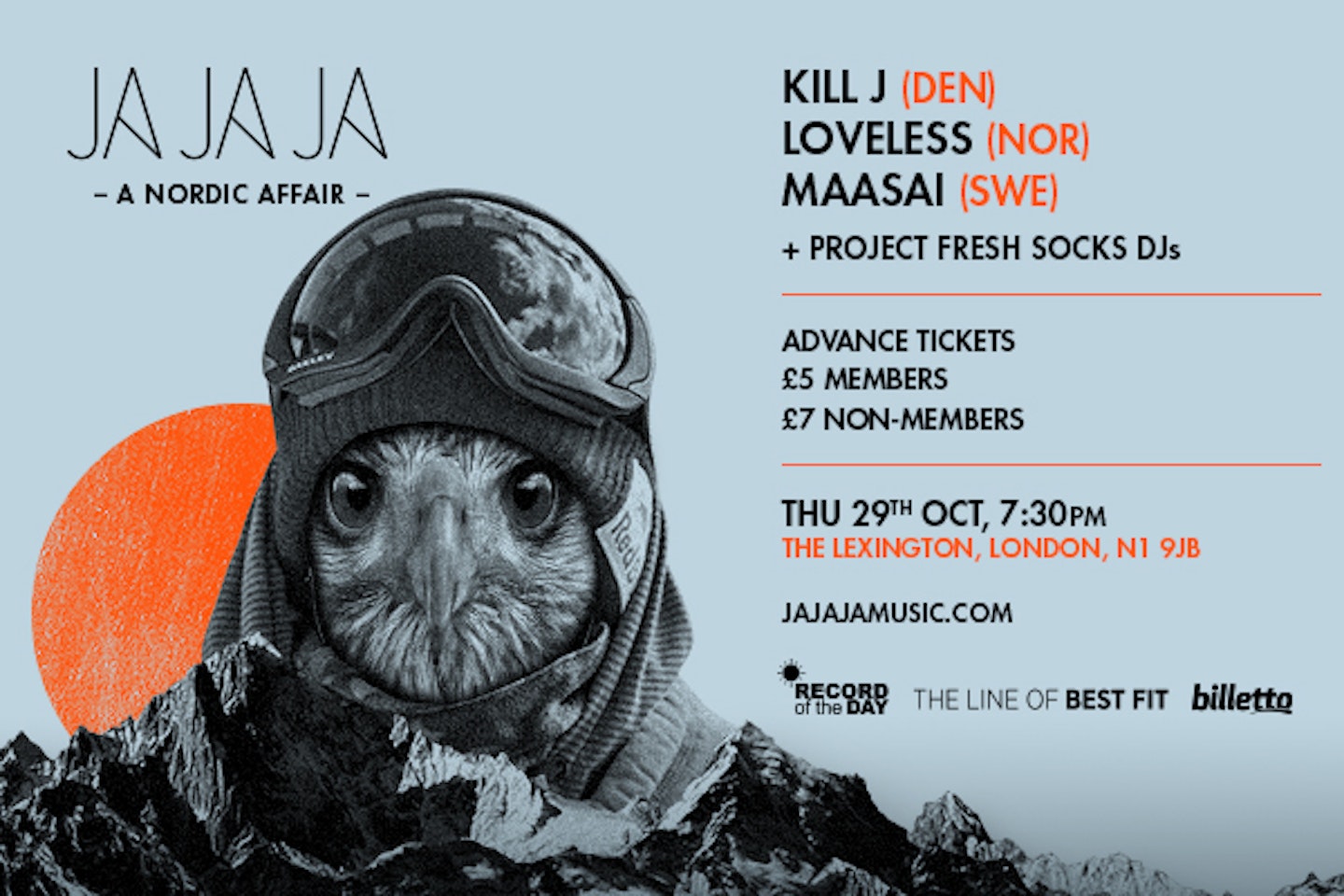 It comes but once a month, and Ja Ja Ja is set to do it all again; announcing its return at The Lexington on October 29th with a rotating roster of the finest Nordic talent.

Ja Ja Ja is pleased to welcome Danish starlet KILL J in October, alongside Norwegian beat crooners Loveless and Swedish cinematic-soul-maestros MAASAI. Get acquainted with the full line-up below…

Resident DJs Project Fresh Socks are along for the ride in October; having also spun up a storm at Ja Ja Ja’s first club night of the season last week at The Lexington with CHINAH (DEN), The Fjords (NOR) and Axel Flovent (ICE). Check out the full event gallery HERE.

KIll J (a.k.a. Julie Aagaard) has been turning heads the past two years with her signature blend of dark experimental pop. A devastating one-two-punch with debut singles ‘Phoenix’ and ‘Bullet’ set the blogosphere buzzing, also catching the keen eye of The Guardian, Indie Shuffle, Stereogum, Pigeons and Planes and landing airplay on BBC Radio 1 and BBC Radio 6music. Deliciously diverse, the sugary sweet ‘Cold Stone’ revealed a more innocent and naive side of KIll J, whilst ‘Propaganda’ burst forth as “a bombastic, fangs-bared snarl at sexism...” (Stereogum). There’s more to come too, with an EP promised this fall.

Prominent identities in their own right, Eirik Tillerli and Filip Kollsete teamed up late 2013 to form Loveless. Following back-to-back remixes, debut single ‘How To Love You’ was instantly added to national radio. Clocking in excess of 500K streams last year, their music has picked up international attention from blogs, magazines and DJs all over the world; also landing them on some of the biggest festivals in Norway, not to mention their own club night in Oslo, Klubb Loveless (guests include Artful [Artful Dodger] and NVOY). New single ‘They Don’t Know’ was hailed Record of the Week on BBC Radio 1xtra, serving the first taste of upcoming project ‘Relationships’.

MAASAI is a Stockholm-based duo consisting of Dominique Teymouri and Zackarias Ekelund. Together they create soulful sound landscapes with a cinematic touch and lyrical depths. The pair broke on to the scene with debut single ‘Memories’, pulling inspiration from varied and abstract constructs - places, people, surroundings and everywhere in between. Follow-up tracks ‘The Healer’ and ‘Forgive Me’ have since held a captive audience; also hinting to the fearless, fragile and all-the-while dreamy atmosphere inhabited by MAASAI’s upcoming debut album - set for release later this year.

Founded in 2009, Ja Ja Ja is the definitive Nordic website and club night celebrating the very best new music emerging from Sweden, Finland, Iceland, Norway and Denmark. Each month at London’s The Lexington, Ja Ja Ja hand-picks the finest emerging talent from the Nordic countries, making sure that only the best music is filtered through to your ears.

Ja Ja Ja is brought to you in association with The Line Of Best Fit and Record of the Day.