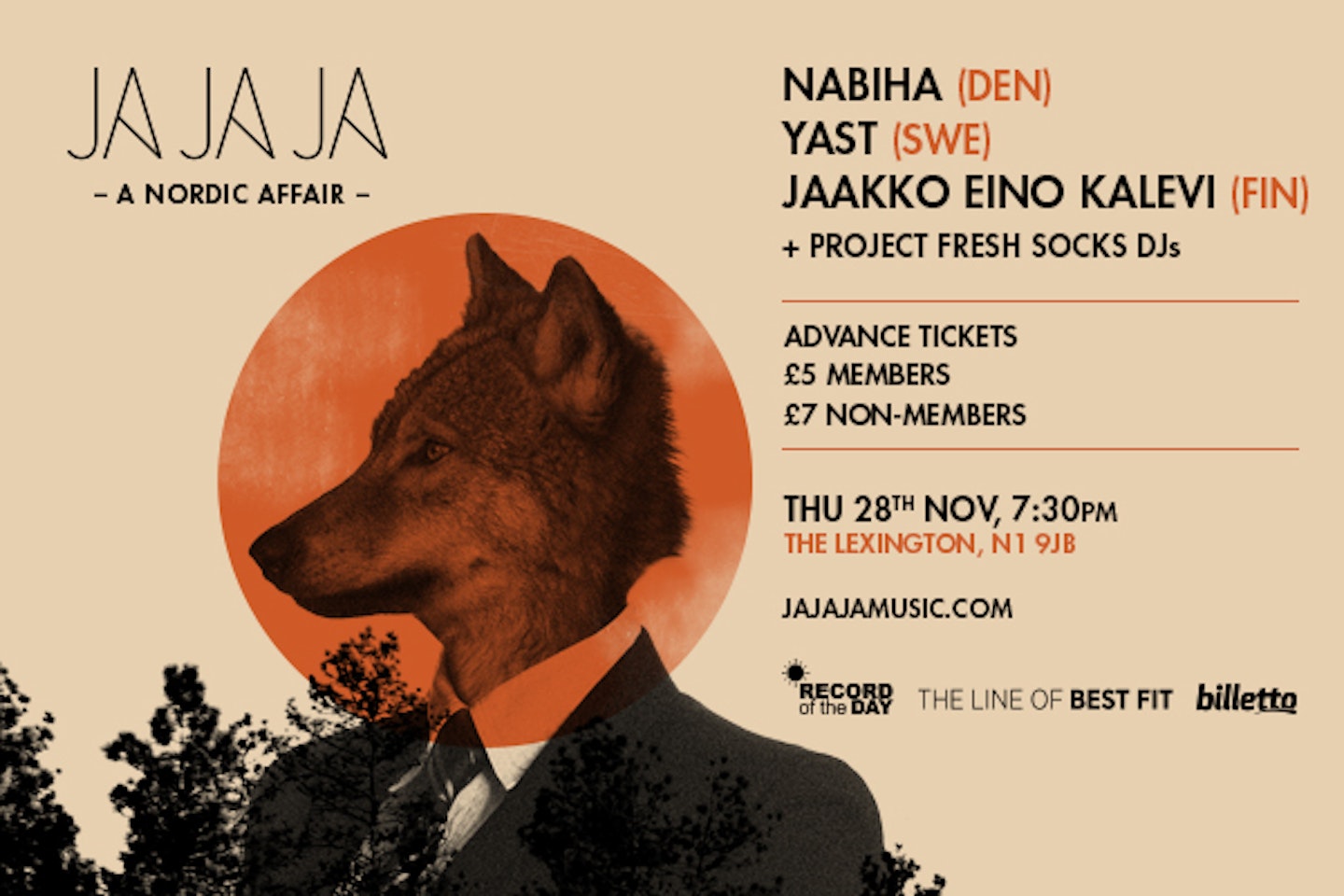 Following on from the imminent inaugural Ja Ja Ja Festival, the UK's foremost new Nordic night Ja Ja Ja has revealed details of their next event at London's The Lexington on Thursday 28th November.

Ja Ja Ja regulars can become members to get discounted tickets and other Nordic treats on signing-up here. Tickets are £5 in advance (£7 for non-Ja Ja Ja members), on sale now from Billetto or more on the door on the night. Don't forget to tell us you're attending via our Facebook event.

Nabiha’s rapid rise to stardom was confirmed by current platinum-selling album 'Mind The Gap', firmly establishing her as a unique figure in soul pop. Nabiha started 2013 as she meant to go on, with a win at European Border Breakers Awards as part of Eurosonic in January. When the catchy title track to 'Mind The Gap' became a single, Nabiha went straight to no. 1 in her native Denmark. Soon people the world over would be helplessly falling for her distinct sound, equally influenced by her West African roots and her colourful upbringing in Copenhagen.

Subsequently recent single ‘Never Played The Bass’ made it to no. 1 on the Break Out Billboard Club Chart in the US, no. 2 on the UK Urban Chart and no. 3 on the UK Club Chart and no. 1 on several European charts including Hungary and Bulgaria. It most notably caught the attention of Perez Hilton, who likens Nabiha to Janelle Monae.

Watch the striking video for 'Mind The Gap':

Maybe it's just a coincidence or maybe it's actually a necessity to have your roots in a steel-producing town like Sandviken to acquire a deep enough longing for somewhere else, if you happen to be dreamy, alternative guys who play music. YAST, the lo-fi romantics, are just that. The band was formed in 2007 by Carl Kolbaek-Jensen, Tobias Widman and Marcus Norberg. In 2008, they were lured down toMalmö and a couple of years ago Markus Johansson and Niklas Wennerstrand, the drummer and bass player from the postrock band Aerial, joined forces.

Dream pop debut album 'YAST' was released in April 2013 to the delight of the global music community, from The Fader to The Guardian and The Line of Best Fit. In addition to this viral attention, they have played tons of shows throughout the year with likeminded artists such as TOY, Tame Impala and DIIV.

Weird World recent signee and Finnish artist Jaakko Eino Kalevi is already something of a cult figure in Helsinki, where he lives and works part-time as a tram driver. Jaakko’s debut upcoming release for the label, 'Dreamzone EP', is an alluring introduction to a charismatic artist whose softly psychedelic pop blends funk and folk in an intriguing and highly satisfying manner. A self-taught multi-instrumentalist who is happiest behind the drums, Jaakko plays, sings and produces all his own material. Having released a steady stream of diverse music on local labels for several years, Jaakko has long been considered one of Finland’s most promising young artists. And with his signing to Weird World, Jaakko becomes the first ever Nordic artist to work with Domino in the label’s 20-year history.

As a taster for his album due next spring, 'Dreamzone'’s four songs take their cues from influences as broad-ranging as Lee ‘Scratch’ Perry (for his “singularity and drive”, explains Jaakko), the “softness and adultness” of Chris Rea, Finnish composer Jimi Tenor and the hyper-vivid fantasy worlds of the more contemporary Ariel Pink and Connan Mockasin. The result is a hugely enticing window into Jaakko’s world – a colourful, magical place where everything happens in its own time and nature and technology get along harmoniously. The EP’s lead track, ‘No End’, a duet with Helsinki vocalist Suad Khalifa, is an opiated love song tethered to a dubby groove, its cantering rhythm splashed with sax and an unforgettable keyboard solo.

Founded in 2009, Ja Ja Ja is the definitive Nordic website and club night celebrating the very best new music emerging from Sweden, Finland, Iceland, Norway and Denmark. Each month at The Lexington in London, Ja Ja Ja hand-picks the finest emerging talent from the Nordic countries, making sure that only the best music is filtered through to your ears. Ja Ja Ja is brought to you in association with The Line of Best Fit and Record of the Day.