Divinely daft comedy from Liverpool's alternative ambrosia (not the custard).

Do we have an early Christmas present for you?! Following the smash hit that was the first ever Funny Looking Fringe, come and join us for a special evening of collaboration, where the greatest comic minds in Liverpool's alternative scene collide to bring you something incredible.

Uniting their comedy muscles to flex the bicep of laughter Travelling Wilburys style (or whichever supergroup you find applicable to your lives), Shaved Dog Comedy, Jim Alsbalstian’s Human Zoo, and Rebecca E Clarke join forces with all former members of the Legion of Doom, back together for the first time in over a year and a half.

It’s a show unlike any other - never before seen material, all new sketches and characters, and the scene’s most popular writers and performers in unprecedented combinations. We can’t stress how great this is going to be. Come and witness the birth of... The Stray Gods. 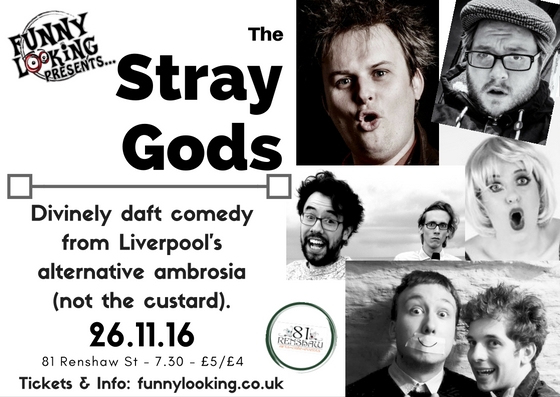 And the writing chops of: