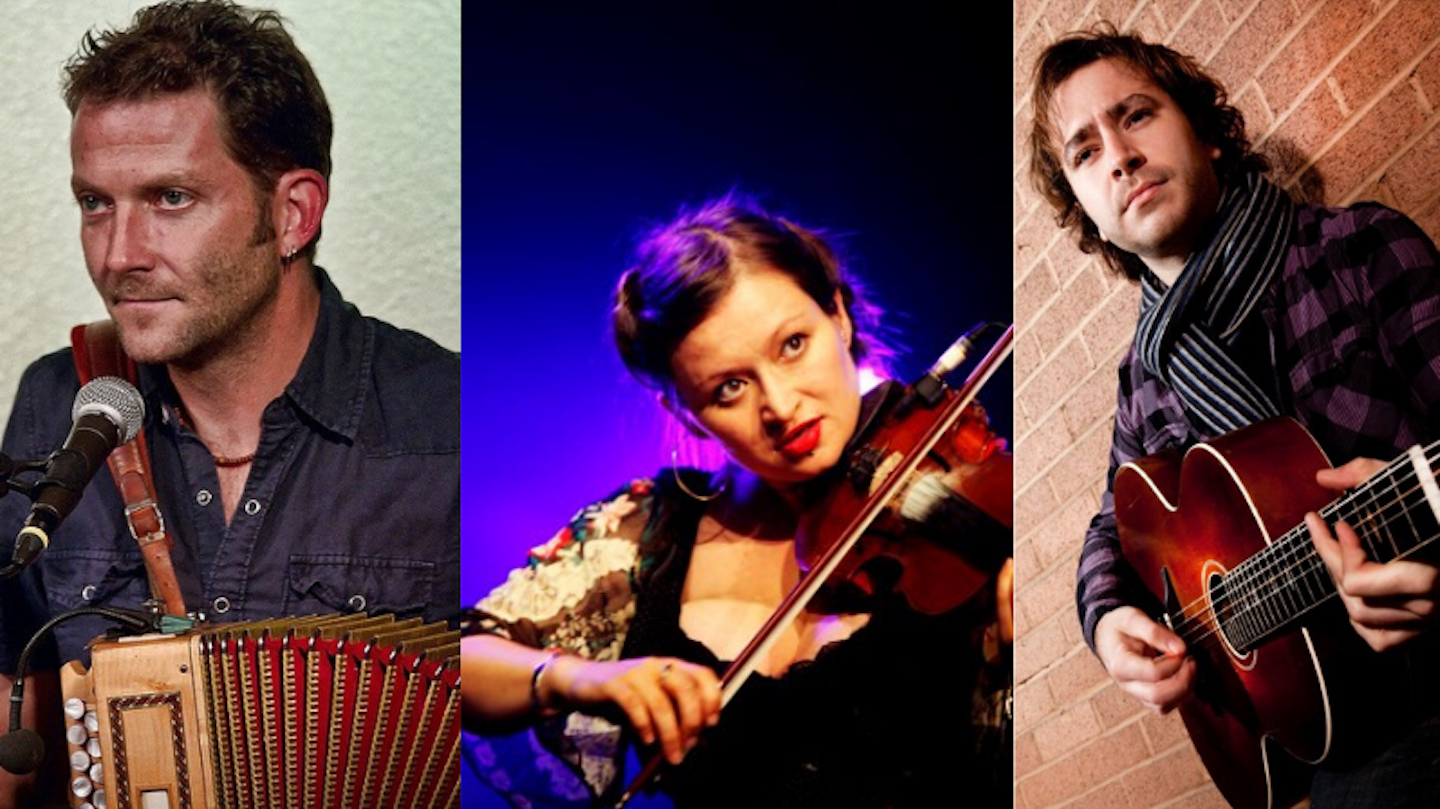 ‘Conversations we’ve had before’...is the first album that Eliza, Saul and David have recorded as a trio and will be released initially as a Limited Edition CD in summer 2020.  It will feature a selection of traditional songs and tunes that they have all played together, but never before recorded.

Eliza Carthy (MBE) is undoubtedly one of the most impressive and engaging performers of her generation. Twice nominated for the Mercury Prize and winner of innumerable other accolades over a 25-year career, Eliza has performed and recorded with a diverse array of artists including Paul Weller, Rufus and Martha Wainwright, Nick Cave, Patrick Wolf and Bob Neuwirth. More than most, Eliza Carthy has revitalised folk music and captured the most hardened of dissenters with intelligent, charismatic and boundary-crossing performance.

Eliza grew up immersed in the world of traditional music. She still divides her time between touring and recording with her legendary parents, Martin Carthy and Norma Waterson as well as engaging in numerous pioneering solo and band projects, including work recently with Kate Tempest (BBC Radio 6 festival 2014) and In what has become something of a parallel career, Eliza has co-presented the BBC Radio 3 World Music Awards, been a regular guest-presenter on the BBC Radio 2 Mark Radcliffe Show and has made many appearances on BBC TVs 'Later with Jools'. In her own right, Eliza has been the subject of an hour-long ITV documentary ('Heaven & Earth') and 'My Music' on Channel 5.   Comedian and writer Stewart Lee described Eliza as "Not the Messiah, but a very naughty girl".

She has recently branched out also into theatre composing for acclaimed British director Barrie Rutter OBE at Shakespeare’s Globe and Hull Truck Theatre, and in film work both on-set and off for producer/composer Kate St John and her husband Neill Maccoll (Far From the Madding Crowd, Tulip Fever).

Saul Rose was a long-time member of Waterson:Carthy, winning two BBC Radio 2 Folk Awards with ‘Broken Ground’ and forming a duo with Eliza Carthy. The double album ‘Red Rice’, of which Saul was an integral part of the ‘Rice’ half, was nominated for the Mercury Music Prize in 1998. More recently Saul has joined Whapweasel, played in Ruth Notman’s band, and formed a duo with James Delarre (Mawkin). He is a founder member of new folk big band Eliza Carthy and The Wayward band. He has played on numerous albums as a guest, including Jackie Oates’ album ‘Hyperboreans’, Norma Waterson and Eliza Carthy’s album ‘The Gift’ and the soundtrack for the films ‘Morris- A Life With Bells On’ and ‘Far From The Madding Crowd’. He was nominated for the Musician of The Year award in the 2010 BBC Folk Awards and during 2011 took the part of Songman in the West End play War Horse.

David Delarre is a musician, composer and music educator. Through his work with the award-winning singer Eliza Carthy MBE, David has performed at a number of high profile venues across the UK and Europe. He has recently recorded sessions for BBC Radio 2, 3 and 4 and has also performed on BBC 1 for Jools Holland and BBC 1 Breakfast TV.  His theatre credits include The Globe’s production of ’The Two Noble Kinsman’ and the Tony Award winning Broadway musical ‘Hadestown’.

*Earlier start time than usual as this is a Sunday gig*
Doors & licensed cash bar open from 6.15pm
Music will start from 7pm.

Please note that Super advance tickets are available until 1 March 2020. After this date, tickets at the advanced booking price will go on-sale, subject to availability (£20 / £18 Under 25's).

Good Honest Folk
Follow
Contact
We bring you some of the most talented musicians, singers & bands on the folk scene. This is awesome Saturday-night music in a lively & warm setting (& with a well-stocked bar). The artists who perform typically have a special focus on English traditional songs & music. Gigs feature headline sets by established folk musicians, as well as shorter support slots by rising talents. Tickets available online and sometimes on the door.